City of Seinäjoki has hired each Summer since 2017 a young visual artist or visual art student to work as the summer artist. The Summer Artist, “Kesäkuvataiteilija” in Finnish, works for two months with their own independent artistic project. The idea is to create something that is visible to the local community and has participatory elements. The Summer Artist works at the Kunsthalle Seinäjoki and has the resources and support of our team and the Cultural Services of Seinäjoki. The Summer Artist can use the workshops space Itikka as their studio. The theme of the project is different each year but there is always a strong emphasis on participatory work-methods and public art.

The Summer Artists of the City of Seinäjoki:

The Summer Artist 2021 Riikka Gröndahl’s Silent Portrait was a participatory, open project where she filmed silent video portraits of people. After the summer, the video footage was be stored in the collection of the Seinäjoki Museums. Later, after decades, it can be shown to future generations. The art work invites us to reflect on what is happening right now and how we will be remembered when we are no longer here – and also perhaps the speciality of the contemporary time we are living in. At the end of the summer the video work was screened at the Kunsthalle before it was being stored in the museum collection. 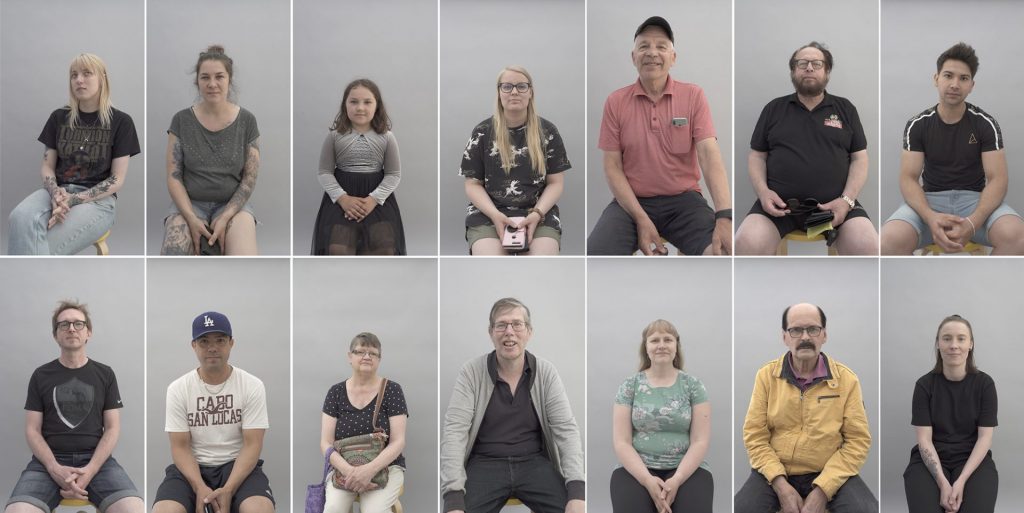 Riikka Gröndahl’s Silent Portrait is a combination of video portraits of voluntary participants.

Sofi Häkkinen’s Serenpidity project invited visitors and citizens to visit the artist at the workshop space Itikka at the Kunsthalle and provide her with ideas, memories, dreams and materials for art works. She then created art works based on peoples’ suggestions. The audience could follow the process at the Itikka, or online. At the end of the Summer, Häkkinen held a pop up exibition to present the art works created over the 1 month period. She also brought the Recover Laboratory performance group to Seinäjoki to perform at the opening of What’s it like to be an animal? and Per Svensson’s Alchemy – The All Seeing Eye. 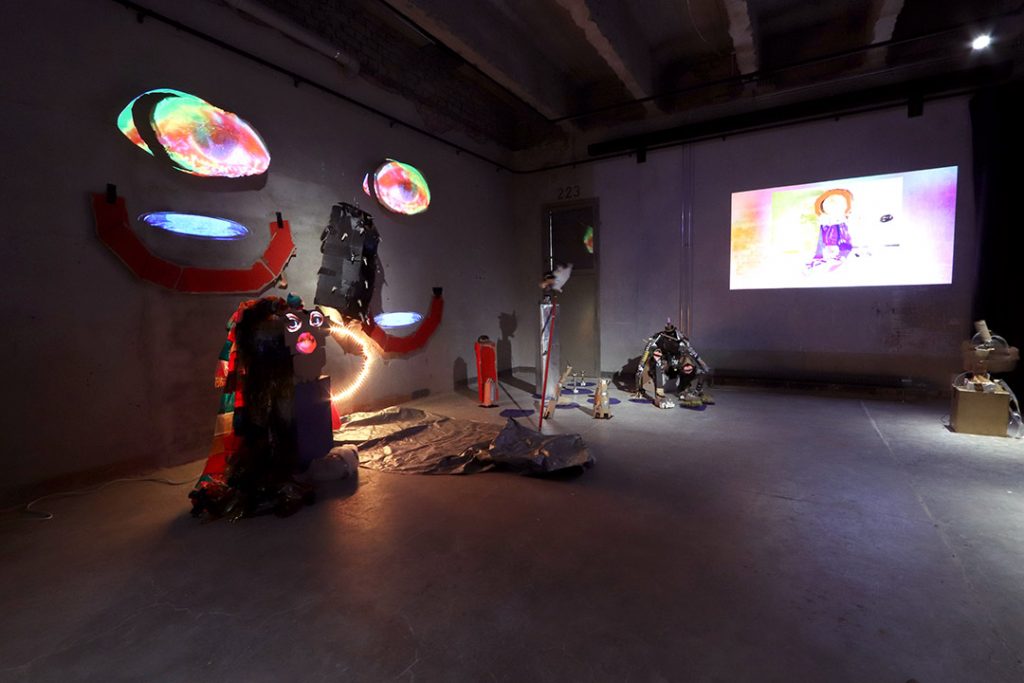 Sofi Häkkinen presented her work as the Summer Artist at a pop up exhibition. Pic: Elina Teitti.

Aeon Lux Koskinen aimed to make Seinäjoki space-ready. The city has declared itself as the “capital of space” in its’ marketing, but what does it mean? Is the city fully prepared for the title?

The summer artist used social media to create a narrative of the city’s fictional sci-fi presence and past, galactical hitch-hiking culture and our relations to other space species. The artist made video works about the capital of space. They were published on the Kunsthalle Seinäjoki Youtube channel.

The summer artist made Space traffic signs that were installed to public spaces (in the picture). The signs for example showed where to hitch-hike to get a ride on a U.F.O, warned about strange light phenomenons and forbid creating crop circles. One of the signs is installed permanently in the yard of Kalevan Navetta. The summer artist also participated in different summer events in the city. 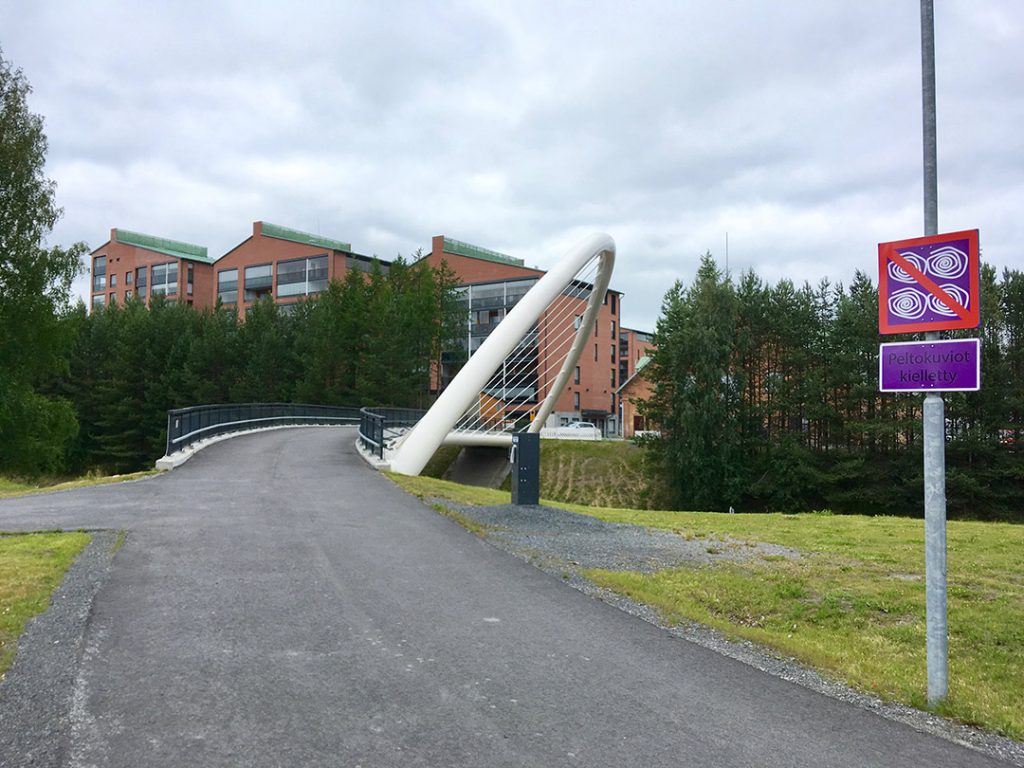 Field patterns prohibited in front of the Itikanmäki residental are and the art and culture centre Kalevan Navetta. Pic: Aeon Lux Koskinen.

Eetu Kevarinmäki made installations and site-specific art works during the summer. He also curated works by other artists to the public space. Installation by Ville Malja and a video work by Nayab Ikram were exhibited at the shopping mall Torikeskus for a week. KASA (Finnish for “PILE”) by Mikko Paakkonen and Mikko Heino (in the picture) was installed at the Citizen’s square in the Alvar Aalto centre.

The summer artist also made art works on his own. He repaired two bus stops and turned the idea of street art upside down. It is often considered vandalism, but is it always about messing up the public space? Could is also repair what’s damaged? In addition he also started individual photography projects that continued also after the summer.

Eetu Kevarinmäki (born 1993) is a visual artist and photographer. He graduated from the Turku Art Academy. In addition to visual art he is interested in producing projects and events. 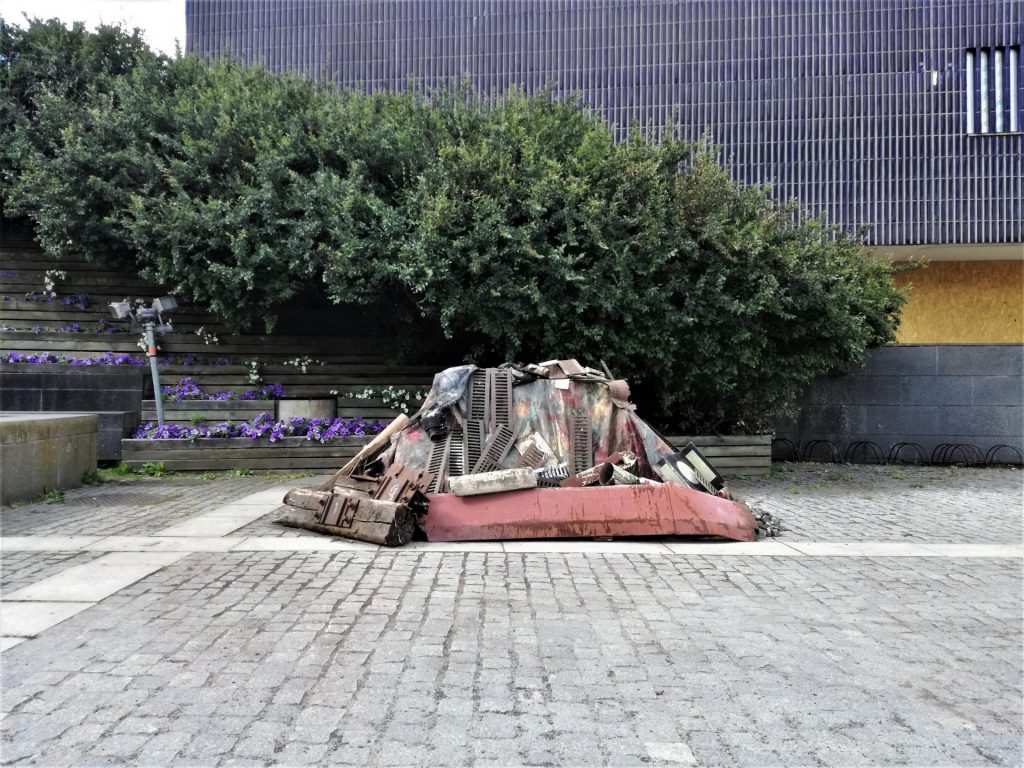 Julia Kukkonen explored Seinäjoki, a completely unfamiliar city with the means of performance over the Summer. She organised  open performance walks where the group explored the city centre in different ways, such as following a colour or a map of another city. The summer artist also sent messages in a bottle to flow in the Seinäjoki river and took over a parking spot in the centre for one day, to turn it into a pop-up café where locals would tell her about their home town. At the end of the two-month long exploration, she made the publication Where they do it themselves – an alternative guide to Seinäjoki.

Julia Kukkonen (born 1988) is a visual artist, innovator and gentle activist. She studied architecture at the Aalto University and graduated from the Kankaanpää Art School. 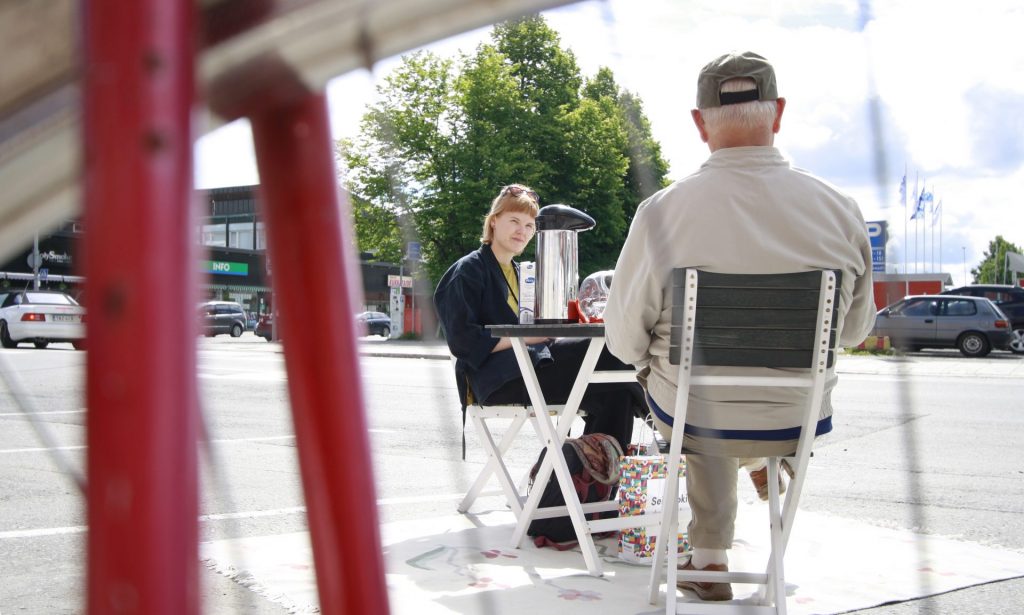 Julia Kukkonen took over a parking space in the city centre and asked the citizens over coffee what they think the Summer Artist should know about Seinäjoki. Pic: Elina Teitti.